Making of "Never Too Late"

Making of “Never Too Late”

Welcome to my latest blog post! This makes number 4 since the beginning of the year. For someone who never thought she’d blog I’d say that’s a pretty good run! This post is about the making of “Never Too Late”, the CD’s second and most irreverent song. In the last post, I talked about the inspiration for writing the song. In this post, I’ll be talking about the recording of the song and about the musicians who are featured.

“Never Too Late” is one of the few songs on the album that was recorded entirely at Wall of Sound studio. Recording started in Spring of 2014 when Katie Gill and I recorded the scratch track which is used as a guideline for recording the rest of the song. Katie then put down the final guitar track. A few weeks later, Susan Clark laid down the keyboard track, coming up with the cool rift in the process. At another session, Lewis Winn came into the studio to record the bass tracks and guitar tracks.

On a particularly fun and memorable night in July, the recording for the song was completed when the band JeeZ LaWeeZ (Katie Gill, Nancy Harvin and Amy Blackburn) came in to the studio to record the backing vocals with their signature sound. Percussionist extraordinaire, John Bartlit finished the recording by laying down the drum tracks with his unique style. After the "bed" was solid, I recorded the final vocals along with the fun rap and humorous ending observations.

As with all the songs, I was so fortunate to work with such an amazing group of talented musicians. Here’s a list of all the musicians along with their bios. 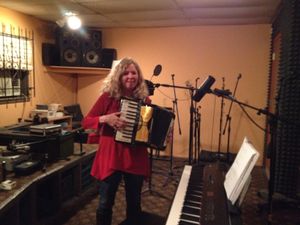 Susan Clark: Susan Clark is a multifaceted, multi-instrumentalist virtuoso.  She is talented in so many areas, including how beautifully she writes, and her incredible skill playing piano, guitar, flute and accordion.  Susan was named a finalist in Kerrville’s New Folk Concert Series multiple times - in 1991, 1993 and 1995, winning first place in 1998. Among the prizes this garnered was the opportunity to perform on Kerrville’s main stage before thousands of the country’s biggest folk followers. Once again, in 2006, she was included in the Kerrville New Folk Finalists! Susan has released 3 CD’s, including her most recent release “Sunlight of the Soul” www.susanclarkmusic.com 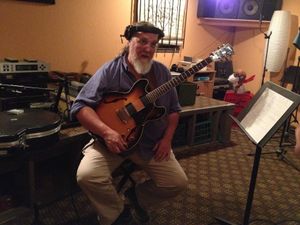 Lewis Winn: Lewis has played guitar for over 50 years, bass for 35 years and has performed professionally for over 40 years. In addition to his many decades as a private instructor, he was an adjunct faculty member in the Contemporary Music Program at the College of Santa Fe from 1994 to its closing in 2009. Lewis also taught the summer session of the Jazz History course at UNM for several years. He is currently teaching privately at Grandma's Music & Sound and at the New Mexico Jazz Workshop where he has also taught many of the Adult Education courses offered there. Lewis’ unmistakable style is immediately recognizable and has been an integral part of the New Mexico sound-scape for decades. Over the years, Lewis has been a featured artist with Max Roach, Eddie Harris, Richie Cole, Jack Walrath, the Cal Haines Trio with Bobby Shew and John Proulx, the Real Time Quartet, Woof, the Patti LittlefieldTrio, Certified Organic, the Jon Gagan Quartet, Melodious Thump, TwoTone and Yoboso, among others. Currently he is the leader/arranger for the “twin guitar” swing group “the Alpha Cats”, co-founder of the “Right About Now” project, and a frequently featured member of countless other groups as a freelance artist. 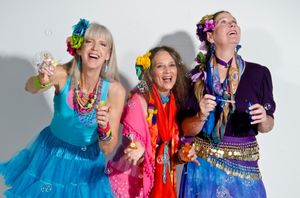 Nancy Harvin:  (left) Nancy, born in South Carolina, was the “chick singer” in several East Coast rock-n-roll man-bands that she vocally fronted. After moving to New Mexico in 1991, she wrote and recorded numerous jingles and songs for radio, television, and one darn cute children’s video.  In May of 2011, she, along with former bandmates Katie Gill and Amy Blackburn, formed JeeZ LaWeeZ where she sings, plays bass, and writes hilarious songs!

Amy Blackburn: (right) Amy was trained as a classical violinist and played violin and viola in the New Mexico Symphony.  She played in several country and western swing bands in the 1970s and '80s, and she has played with the Celtic Fringe in Socorro for many years. In 2007, Amy was deeply honored to be inducted into the Buckarettes, a cowgirl swing band, as a permanent member. She is also a permanent member of Mariachi Azteca, a local mariachi band. Her latest musical endeavor is the exciting new trio, Jeez LaWeez, with Katie Gill and Nancy Harvin.

Well, that’s it for this week! See you next time when I’ll be discussing the writing and inspiration of the 3rd song on the CD, “Fortune”.